On October 4th, 2018 Association “Food for All – Food Bank MK” has signed a Memorandum of Collaboration and Understanding with Public Company “Communal Hygiene” – Skopje (CHS). The official signing of the MoU followed after a few productive meetings between WSS Effect – Food Bank MK and the public company. On each of these meetings, representatives from both WSS Effect and CHS have discussed about the possible synergy between CHS’s youth educational programme and WSS Effect awareness rising campaign and action. Main goal of the MoU and the collaboration which will start in the following months was to enlarge Food Bank MK informal network of supporters and collaborators including, to build cross-sectoral partnerships which will work towards same goal – better legal framework for less food waste, less food poverty as well as better foodbanking i.e. donated surplus food redistribution system.

Public Company “Communal Hygiene” – Skopje has a twenty plus decades of history in youth education related to clean environment and environmental protection. On the other hand, one significant part of WSS project is dedicated to education of young people regarding food waste and food poverty. 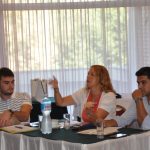 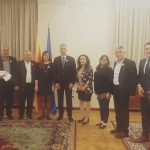 “WSS EFFECT” ON A MEETING IN THE PARLIAMENTNews