WILL REPUBLIC OF NORTH MACEDONIA BE THE NEXT COUNTRY TO REGULATE THE FOOD WASTE? – WE’RE WORKING ON IT

On July 2nd and 5th a following round of meetings have been organized between a number of representatives from relevant state institutions and bodies such as, the Food and Veterinary agency (FVA), Ministry of Labor and Social Policy, Ministry of Finance & othjers, including organizations such as Association of the Self-government Units (ZELS), National Democratic Institute (NDI), Food Bank MK and Ajde Makedonija. Main focus of the meeting, as reported previously is to agree and prepare the draft law on surplus food donation which will regulate the surplus food donation and redistribution, the so called “surplus food operators” and the requirements and obligations for the food industry and the non-profits which redistribute surplus food to the people in need.

In the past weeks, some of the ministries and bodies engaged in the Work Group, including Food Bank MK have introduced their comments regarding the regulation of the matter. In the following days, especially on the next scheduled meeting of the Work Group (12-13 July 2019) organized by FVA – coordinator of the Work Group and funded by the NDI and WSS Effect – Food Bank it is expected that further areas of the text will be developed and a final draft document will be presented to the Government, as expected by July 20, 2019.

WSS Effect is a 3-year campaign and action against food waste and food poverty. Since of January 2018, the action is being implemented by Food Bank MK, Organization of Women from Strumica, SIBAHE – Slovenian Food Bank and the European Food Banks Federation (FEBA). WSS Effect is funded by the European Union.

All information, opinions and views shared on this website are responsibility of Association “Food for All – Food Bank Mk” and they do not reflect the official views of the EU on the matter. 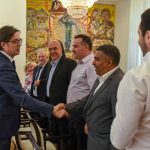